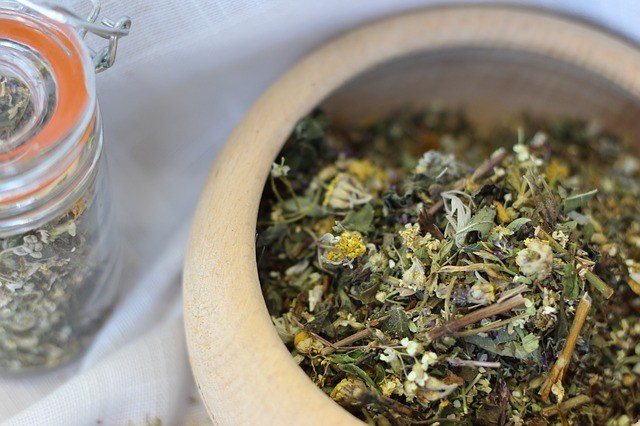 Herbs. What can they NOT do? From seasoning a tasty dish, to providing supplemental nutrition, herbs are a staple of day to day life. More importantly, herbs are used to keep our bodies in tip-top shape. Not only are they great for preventing disease, they also have the power to cure.

There are natural herbs that kill cancer cells. Yes, really. Scientific research has shown that certain herbs can wreak havoc on cancer cells. Sweet Wormwood, Thunder God Vine, Feverfew, Blood Root, and Skull Cap are all natural cancer remedies that you’ve never heard of, possibly, but should definitely get acquainted with.

Artemisia annua is commonly known as sweet Wormwood. Derivatives of this plant are referred to as, Artemisinins. Artemisinins has the potential to treat many diseases, and inhibit the reproduction rates of several viruses, such as Hepatitis B and C, Influenza, many Herpes strains, and even HIV.

While very few human studies have been done, about its effectiveness against cancer, Artemisinins have a reputation for very few adverse reactions in human subjects, when treating other diseases.

In particular, breast cancer cells, colorectal cancer, ovarian cancer, pancreatic cancer, leukemias, and many forms of lung cancer, have been successfully been treated in animal subjects. Additional research in animals carrying, actual human cancers, has also shown Artemisinins to be an effective treatment.

For more detailed information about the science behind this go to https://www.ncbi.nlm.nih.gov/pmc/articles/PMC2758403/#__ffn_sectitle.

The Chinese herb, Lei Gong Teng, has many aliases, Thunder God Vine is probably the most widely known of them all. Medicinal power is found in the root of the Thunder God Vine. The leaves, stem, and flowering part of the plant are all poisonous. This is not to be taken lightly, this plant, if not used properly can cause death.

This plant is native to the Orient. It has been used for centuries as an anti-inflammatory, treatment for autoimmune disease, and issues related to reproductive health.

A study done by Johns Hopkins School of Medicine’s research team, revealed that the thunder god vine’s extract, Triptolide, has value in the war on cancer. It can inhibit the reproduction of many cancer cell types, and even causes some types of cancerous cells to die. This was known to the research team, as early as 1972.

Preventing the use of triptolide for cancer treatment, was the fact that healthy and unhealthy cells were both destroyed at similar rates. The good news is that further studies involving Thunder God Root extract have revealed that when combined with glucose, yes sugar, the triptolides are virtually sought out by the cancer cells. This equates to cancer cells being killed, and healthy cells being left virtually unscathed.

For more information go to https://www.hopkinsmedicine.org/news/media/releases/solving_a_traditional_chinese_medicine_mysteryFor

Feverfew is a plant that has a well-established reputation for its effectiveness as herbal treatment for migraines, fever, toothaches, as well as rheumatoid arthritis.

In comparison to herbs such as the Thunder God Vine, Feverfew is much less likely to cause severe harm. The chewing of fresh Feverfew plant matter is not recommended due to a higher likelihood to cause ill side effects, but when the extract is taken as directed, it is considered to be relatively safe.

The big news about the Feverfew herb is its effect on human leukemia cells. Preliminary studies comparing the use of this herb’s extract, known as parthenolide, versus the commonly used chemo drug, cytarabine, have resulted in parthenolide proving to be more selective at attacking cancerous cells and sparing healthy cells than the cytarabine.

For further reading go to https://www.urmc.rochester.edu/news/story/731/plant-derivative-attacks-the-roots-of-leukemia.aspx

Bloodroot is a flowering plant that grows wild in the Eastern U.S. and Canada. The plant is called as such due to the contents of the root. Cut into the root of this plant and its red sap will make its nomenclature, self explanatory.

Bloodroot is most commonly known as an ingredient in black salve. For those unfamiliar with this Native American herbal remedy, black salve is a topical ointment used to treat skin tags, warts, skin cancers, and so on.

Evidence suggests that Bloodroot is a potentially viable treatment for Melanoma as well as Cervical cancer. Bloodroot seems to be naturally adept to seeking out the melanoma cells.

Black salve and Bloodroot have gotten a bad rep, due to reports of skin lesions caused by their use. However, the traditional use of the medication would indicate its ability to dissolve skin tissue, by my logic.

As with anything, before forming an opinion, please do your own research.

You can read more about this at https://draxe.com/black-salve

Skull Cap is yet another natural remedy that shows promise in the war on cancer. Notable for its calming and relaxing properties, Skull cap can also be touted as a possilbe cancer remedy. Research has revealed particularly positive results when treating brain tumors, head and neck cancers, as well as prostate cancer with skull cap.

The great news is that when compared to other treatments, Skull Cap extracts causes less cell mutation than many drugs that are currently used.

Skull Cap is packed with antioxidants, has anti-inflammatory effects, and can help induce a state of calmness. Using Skull Cap as an herbal supplement for these reasons alone, is appealing. Using the herb to shrink a brain tumor, is intriguing.

For more info go to https://draxe.com/skullcap

We have a tendency to underestimate the power of the natural world. An herbal cure can be just as dangerous as a typical pharmaceutical. At the same time herbs can be just as effective, if not more. Nature provided us with powerful tools to cure and compliment our lives.

Please before undergoing any natural treatment, seek the help of a professional. Natural health professionals are becoming more common, so finding one should be no problem. Ensuring proper dosage is an absolute necessity. Be mindful, as well of the interactions that can occur from the use of other herbs and pharmaceuticals.

Whatever you do, investigate the options and do some research of your own. No one knows what you need, more than you do. Don’t rely on here say or rumors when making life altering decisions. Believe in yourself and your own ability to heal.

When traditional medicine has failed you, remember that other options do exist.

Good luck on your healing journey!

SIGNUP FOR SPECIAL OFFERS AND MORE!